What was I trying to solve?

IKEA had four main areas to focus on: finding new ways of gathering ad-hoc qualitative feedback; promoting an open and transparent communication channel and long-term relationship building with customers; researching IKEA customers and their behaviours, needs and motivations towards providing feedback; and to provide recommendations that advises IKEA on what approach to take to achieve their ad-hoc feedback goals.

My role and responsibilities

I collaborated with a team of designers to interview the stakeholders and understand the problem we were trying to solve. Individually, I designed and conducted a research plan tp understand the needs and desires of the audience. This was then presented to the IKEA team for review.

What are the design challenges?

Based on the brief and the stakeholder interview, we uncovered the four areas of objectives which were:

IKEA have a vision to create a better everyday life for the many people. Their mission is to offer customers opportunities to improve their lives at home.

Customer expectations have changed, and IKEA have an ambition to co-design and create the IKEA Australia of the future, together with their customers.

The mission of this new platform is to enable IKEA to gain qualitative insights from their customers, and potential customers. A deep understanding of the why and how, and to be able to explore different topics with their customers.

This new platform will be a vehicle for IKEA to connect with audiences that have had a positive experience, or had no experience at all.

IKEA want to drive visitation from people that may not have visited the store, where they don’t have any visibility on what they think or feel of IKEA.

The foundation of this project is engaging audiences to co-create, rather than measure once.
They would start with qualitative, and then that could lead into a quantitative piece where it is validated across the market.

What has been done?

Incentivising is something to think about. IKEA would be more inclined to support foundations or initiatives such as sustainability or climate action.

Video and the power of storytelling or narrative to get a point across is an area of interest.Translating data insight into action & initiatives to produce a visible change in that area of the experience that we're trying to analyse. That is where they currently struggle.

We don't have any identifiers, or anything that's specific. We are interested in attitudinal & psychographic background.

We want to create a conversation around the services that they might want to offer, or experiences that they want to generate.

To be able to submit topics to drive as well as to be completely open to what we don't know.

To lean towards the first half of the customer journey, before the interaction happens with IKEA.

This project was guided by a User-Centred Design approach to understand exactly what motivates visitors and workers in the Circular Quay area, and to start to understand what they may be looking for in a Digital Experience.

This process moves through 5 key steps:

Empathise
with IKEA customers, to understand their motivations, pain points, and behaviour towards providing customer feedback by conducting user interviews.

Define
and hone in on their needs through creating affinity maps, empathy maps, personas, user journeys, pains and gains, and defining the design opportunity.

Ideate
by creating ideas for how this could be solved, with photo elicitation and expert reviews.

Test
ideas with users via interviews, surveys and photo elicitation.

Recommendations
were relayed back to key stakeholders based off the research I had conducted. No prototyping was required as part of this brief.

I planned and conducted 13 interviews with users, to understand their needs, motives, behaviour, and pain points around customer feedback.

User feelings towards leaving feedback are complicated, and in some cases inconsistent.

Some avoid feedback. Some say they love giving feedback, but only in certain situations.

Some will only leave feedback if they had an extremely good or bad experience. Others will let their voice be heard with actions, and avoid shopping with a brand.

Users were most familiar with email surveys, live chat was popular, and some have had bad experiences with SMS surveys.

A lot of users felt they get too many emails, and it wasn’t the best place to reach them. Others wanted an email, and to be able to choose to do the feedback or survey in their own time.

Some users were open to receiving surveys via social media, while others were opposed.

Most users felt that leaving audio or video feedback was way too personal, while others thought it was a quick and easy way to respond.

Over the board, it was very apparent that users thought the majority of surveys were misleading with how long they would take.

Users were concerned with data privacy, and what was being done with the information they provide.
Sometimes feedback was just too difficult, and gave up.

Transparent and clear communication about the length and time taken for surveys, and what will the data be used for.

Users clearly wanted ‘in the moment’ feedback, and for it to be easy and quick.

Users were also interested personalised, relevant, surveys. The option to leave quick feedback on a website popup, or even at the checkout.

Some also wanted communication or updates on company initiatives that the feedback is driving.

Secondary Persona - People who are open to giving feedback
Focusing on the users who like to give feedback, we can see they still want the experience to be quick and easy, and in the moment.
All users are different, and would like options for the way they leave feedback.
They want questions to be relevant, specific, and personalised.
Users want transparency, and clear communication about what is being done with the information they provide.
Users also say they prefer to be incentivised.

What was the UX opportunity? 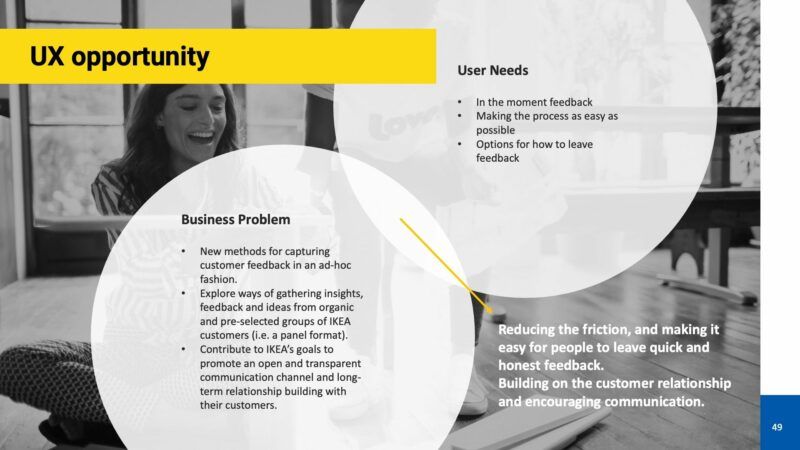 Based on the information and process so far, I was able to look at the business problem, and the needs of the users, and understand that the key opportunity was reducing the friction and making it easy for people to leave quick and honest feedback.
Building on the customer relationship and encouraging communication.

I wanted to try and further validate my findings so far, so I did some photo elicitation with users to gain some qualitative feedback on different types of surveys. 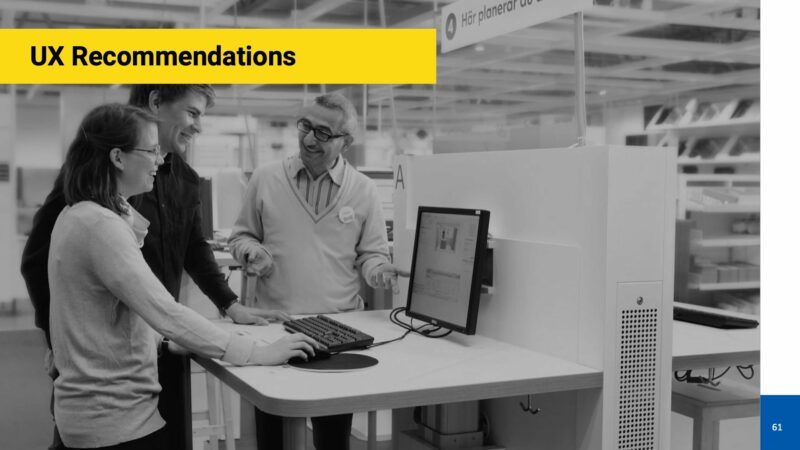 Building trust with the brand, through open and clear communication.

In the moment – have a popup on the website

In the moment – have a kiosk at the checkout? Better messaging at Kiosks, and relevant questions.

In order to communicate with potential customers before the interaction happens with IKEA, users were open to advertising via social media and display ads.

Let's work together to craft solutions that delight and inspire users.

Digital and user experience designer. I would love to learn about your business, and talk about how we can work together.
Let's chat.

FinancialForce is the leading cloud ERP for the new services economy. The #1 ERP native to the Salesforce platform, FinancialForce unifies data across the enterprise in real-time, enabling companies to rapidly evolve their business models with customers at the center. Agilyx and FinancialForce collaborate to deliver industry-leading Financial Management and Professional Services Automation (PSA) solutions to people-centric organisations in Australia and New Zealand.